If you’ve ever been married—or in any relationship, with anyone, ever—you know the importance of negotiation.

Two people who disagree will never find common ground without some amount of back and forth. Sometimes that means one person gives in to what the other person wants; sometimes it doesn’t.

That’s loosely what Stuart Diamond’s recent book Getting More is about. Diamond, one of the most famous professors at Wharton Business School, wrote this book not about how to get everything, but how to get more out of life by valuing the other party’s perceptions. It covers everything from getting your kids to do their homework to working billion dollar deals; I highly recommend listening to the audiobook while you’re running around in your combine.

I don’t need to tell you that rent prices affect your own wallet. But it’s easy to overlook a simple factor in negotiating: you are that landlord’s source of income.

Think of it this way: nobody wants to take a pay cut. Even if the company they work for is going under, people will generally quit before taking a pay cut. They feel alienated by the people who pay them.

Why would landlords feel any different? When you come to the table offering to pay less money for a new lease term, it’s like asking them to take a paycut. They might not be able to afford a pay cut, and even if they can, let me reiterate: nobody wants to take a pay cut.

To understand that perspective is to approach negotiation with a high level of respect. You’ll have a much better footing that way.

Landlords have certain needs, just like the rest of us.

Landlords are often older in age, and they may have assisted living or health care expenses. They generally don’t have a regular job, and just like everyone else, their lifestyle changes as their income changes.

You can step into a few of those needs by negotiating accordingly. Bring an offer to the table that factors in the many expenses the landlord lives with.

If the price ends up to high for you, you can even offer to introduce them to someone who might be interested in renting their land. A few words can add a whole new level of empathy to the equation, soften any further negotiations, and build your reputation as someone people will want to work with.

Before you ever approach a negotiation, you have to understand your own economics. 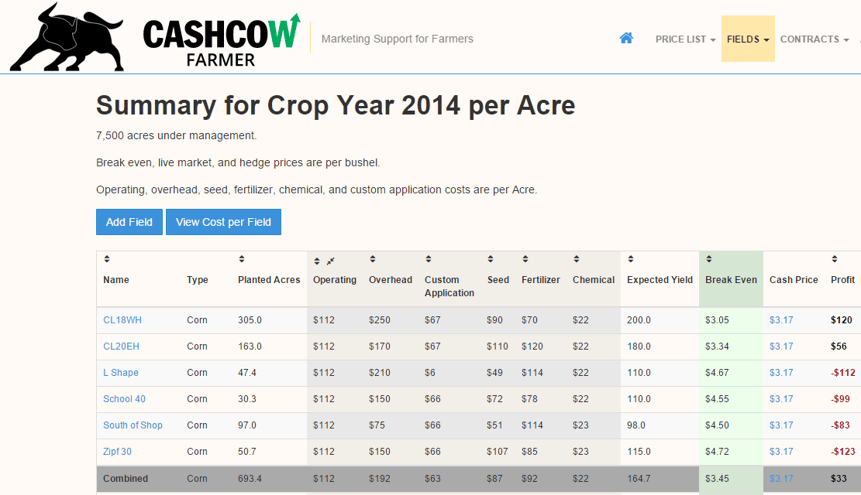 This is where Cash Cow Farmer really helps: you can see exactly what you’re making or losing on every field you farm. You can use that data to determine exactly how much you can afford to pay a landlord, which will be a hard ceiling in your negotiations.

When to give in

Knowing when to give in is simple, at least when it comes to land rent—if you know what you can afford, you simply don’t go above that number.

Be prepared: there are other farmers interested in the same ground you now rent. If the landlord does open it to the market, you might lose the soil. This is sometimes the best scenario; I’ve let land go that my family has farmed for 25 years, but financially it’s served me well.

Be respectful, but don’t go above your ceiling. Ask them to let you know if they open it up for bid down the road. And don’t burn the bridge: opportunities may arise later for you or your kids if you hold their respect.

When to not give in

If the landlord’s offer doesn’t line up with accurate economics, keep negotiating. The best thing you can do is bring hard numbers to them. Then you’ll be negotiating based on evidence.

For example, the highest price for corn in this last crop was $4.54 on the futures exchange. Deduct your basis, which we’ll say is $0.65. So if you had about a $3.90 cash price, could you make money on that rented soil or not?

If you could have made money but you marketed poorly, you won’t have a lot of bargaining power going into the negotiation. But if you sold all your crop at the best price of the year and still lost money on it, the landlord can’t expect any more from you.

If the landlord is still stubborn, never be disrespectful but share the economics with them. No one’s going to rent land that costs more than it can possibly produce. You can, and should, use that as a negotiating piece.

Whether it’s your wife or your landlord, go into negotiation with empathy and respect. At the same time, go into it with preparation. There’s no reason you should ever come out on the bad side of a deal if you approach it with those three things.

My best parting advice is to read Getting More. You can also find lots of interviews with Stuart Diamond online. I’ll throw another book your way, too: Check out Stephen Covey’s The 3rd Alternative. It gives lot more great advice about negotiation.